Tim Romero, from the suburbs of Virgina, USA, currently lives in Tokyo, running the podcast Disrupting Japan, and investing in and acting as a mentor to startups.
He says he had a “boring” childhood and was nerdy – playing Dungeons and Dragons and programming his Commodore 64, one of the early home computers. He went to the University of Virginia and majored in physics, but it was his hobbies in public speaking and music that first helped him go to Japan. Tim was signed to a Japanese record label but then swiftly had his contract cancelled after just a month in Japan. Being the end of the 80s, Japan’s economic bubble was at its peak and Tim made a living writing speeches for salarymen and playing music here and there.
After another attempt at success in music in Los Angeles, Tim took a job as a programmer for a Japanese company in LA and then got transferred to Japan. in 1999, he started Vanguard, an e-commerce business running on the still very new internet. Then, the dot com bubble also burst, and Tim sold his company. Since then, he has continued to work for himself and also work for other companies.
What do you think are the (dis)advantages to being a foreigner working professionally in Japan?
Tim: Any difference you have can be turned into an advantage or a disadvantage depending on how you use it, so for example, ways you can use something to your advantage are being able to reach out to foreign companies, being able to do business in English fluently is a very important skill in Japanese companies that want to do business overseas. In terms of sales in Japan, ironically, there’s been times where my lack of Japanese ability has let me use sales tactics that my Japanese colleagues would love to use but can’t because they’re Japanese. It lets me drop into informal Japanese and be much more direct than my Japanese colleagues can.
You know, it’s funny, I’ve never particularly looked at it as a challenge I’ve had to overcome, it’s more a long series of lots of little puzzles you have to figure out.

What lead to you starting the Disrupting Japan podcast?
I was negotiating a book contract with a publisher called Impress here in Japan, they wanted me to write a book about startups in Japan. And, writing a book is a tremendous amount of work and absolutely no money involved. I mean, there’s some but nobody really makes money writing a book. The publisher and I had different ideas about how much interest there would be in Japan for a book about startups written by a foreigner, they thought there’d be lots more interest than I did.
Around this time I just got the idea to try a podcast after I’d decided not to do the book. At first I just thought it would be me interviewing a few of my friends and that the show might have a couple hundred listeners, but it’s up to almost 5000 listeners per show now, which I think is just amazing. There’s so much interest in Japanese startups around the world now, and I just love sitting down and talking with these people.
Has the show changed much since you began doing it?
I like to think the production value’s gotten a little bit better, when I go back and I listen to those early episodes they’re kind of cringey sometimes, but the basic idea hasn’t [changed]. I’m trying to introduce all of my listeners to some of the amazing stuff that’s going on here in Japan and not just “company A is building product Y”, but you know, what makes these people tick? Why did they decide to leave a big company and start a startup? And, in many cases how they managed to convince their wife or husband it was a good idea to do so.
What’s something you have achieved or experienced thanks to your connection to Japan?
I think the list would be much shorter [if it was] achievements that had nothing to do with my connection to Japan simply because I’ve been living here for the last 25 years. All of my adult life, from my music career to my writing career to startups and now Disrupting Japan have all been based around Japan.
I think the ironic part of it is, when I first came here, I’m not one of those people who were in love with Japan. I came here because of a series of coincidences and I was planning to stay for a couple of years and I always was planning on going back. But new projects came up or I got started with a new job, there was always something exciting going on here, and after 25 years I’m still here.
It’s hard to say what I’m most proud of. Some of the teams I put together in my earlier startups were amazing to work with, I’m still in touch with those people. I’m really proud of the community that’s come together around the Disrupting Japan podcast. But, Japan itself, everything I’ve done in the last 20 years I can think of off the top of my head has had some connection to Japan because that’s where I live. 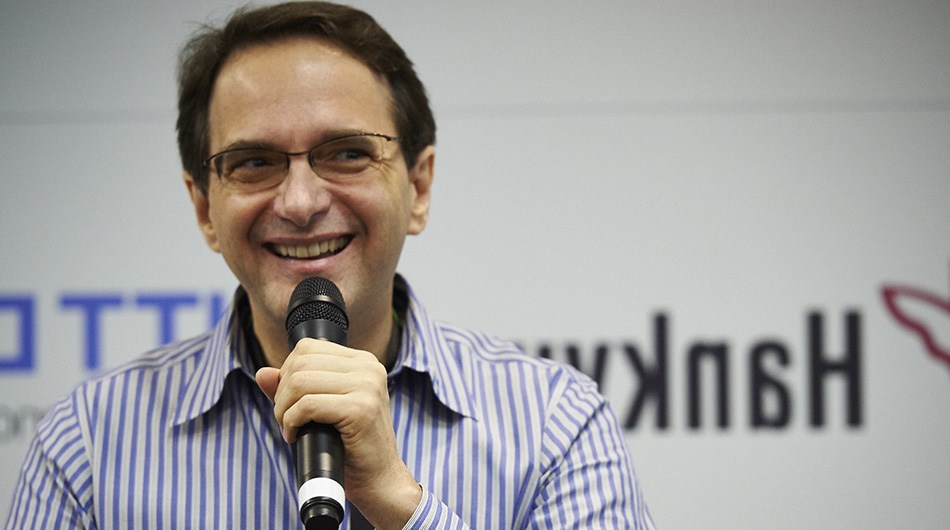 What advice would you give to current students of culture or language?
This advice applies to everyone who does not want to be an academic, because if you want to be an academic and teach culture and language I have no advice for you because I have no idea how that academic world works. But, if you want to go into the business world or if you want to start a business that ties into Japan, what I would say is have something to offer beyond your study of the culture or language. Because, as a foreigner coming to Japan the vast majority of the Japanese population will speak the language better and understand the culture far better than you can. So, you’ll have no real advantage over anyone else, the important thing is to have some kind of marketable, in-demand skill. That might be an MBA, although you’ll be snatched up much much quicker if you are an engineer or a web designer or particularly a UX/UI designer. Have a skill, have an offering besides the knowledge of the language and the culture. And by the way, it doesn’t mean you necessarily have to have a double major, it just has to be something you’re good at, and bring that to Japan. Build a career around that.
Regarding the difference between moving to Japan in the 80s compared to today, he says;
It’s much easier now. Visas are easier to get and Japanese companies and society in general is far ore accepting of foreigners than it was in the 1980s. There are a lot more foreigners here now and more importantly there are many more employment opportunities outside of the big Japanese firms.
And as for speaking Japanese;
I didn’t speak a word of Japanese when I first came to Japan, and I only really spoke at a conversational level when I founded and sold my first company. I still don’t consider myself fluent. I can’t argue in Japanese and I don’t get a lot of the jokes. Learning Japanese is partially talent, I suppose, but its mostly a matter of how much time you devote to it. Not speaking at all will severely limit your options, and you should start studying the language as soon as you arrive — or even before.  In the end, however, it will be your other skills that are most important.
Tim also has numerous resources on his website, including his recommended podcasts about Japan and his advice on connecting with Japanese startups.
To listen to the podcast, search for Disrupting Japan on your podcast app of choice, or visit the site here!