Robert Millar is the founder of Ginza Hub, a co-working space in Ginza, Tokyo. Ginza Hub rents desk space to people starting their own businesses and offers fast wi-fi, meeting rooms, and coffee made by Robert himself. The space also offers the ability to meet likeminded people – usually foreigners trying to create their own empires in Japan – and collaborate on projects or swap services.

Hi Robert, where are you from?

R: I am from the Gold Coast in Queensland, Australia. I came to Japan when I was 21 years old, I’ve been back to Australia a couple of times but I’ve been in Japan for the last 26 or so years. That is most of my adult life, in fact most of my life.

This is very much home now. I still have a place on the Gold Coast that I escape to during the pollen season here. Tokyo is very much my home.

And when did you first become aware of Japan?

R: When I was a little kid before getting off to primary school, I would watch old black and white chanbara movies – ninja movies, samurai movies. They were all in black and white, terribly dubbed, but I was fascinated by this culture of swords and shuriken and leaping backwards into trees. I wanted to become a ninja.

I took up judo, took up karate, because that was the closest thing I could find in Australia at the time and ended up coming to Japan in 1988 ready to find ninjitsu and get into it. I was disappointed to find most of it is very tourist oriented, lots of shows for overseas tourists, not a lot of serious ninjitsu. 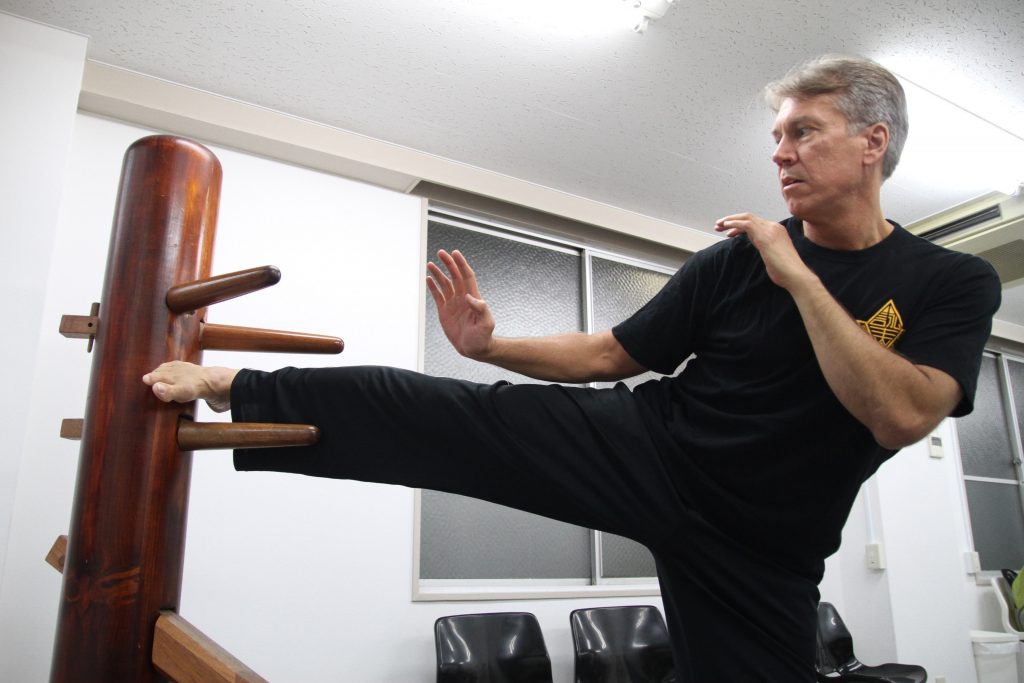 Robert also says there’s a lot of martial arts that call themselves ninjitsu, but ninjitsu is actually assassination and that’s a hard business to get into! He was also lucky enough to study Japanese in high school at a time when only two schools in all of Queensland offered it. Most schools were only offering French and German, which Robert says is all well and good but Australia is close to Asia and so Asian languages like Japanese were much more appealing to him as a student.

After high school, what did you go on to study?

R: I studied at Griffith University, where I did modern Asian studies with Japanese language. I got most of the way through that then thought nah this is no good, I need to be in Japan and so I bailed out, came over to Japan and got straight into it.

I dived into the martial arts here, studied several different martial arts, the main one at the time was shourinji kenpo, I studied up to the 3rd dan level. I hung out at some very, very cool, very high level dojo and that really launched me.

Robert now teaches kung fu, wing chun and Bruce Lee’s jeet kune do in Ginza after moving his focus to Chinese martial arts. Before he studied at Griffith University he also had a go at Applied Science in biology and geology at the University of Southern Queensland.

What did you do when you got to Japan?

R: My first job out of university was teaching English in Kobe. I joined an organisation called Berlitz which was a large language school out of Germany. I ended up becoming the youngest Berlitz head teacher or school manager, at the young age of 23. I built up a fine school in Hyogo Prefecture and once that was a success I decided to move back for some years and do something different.

What I really wanted to become was an entrepreneur and not have to follow other people’s orders, and to see how far I could take things, which I did. It wasn’t all pretty, but I’m certainly living the life now and I do enjoy it.

My next job was becoming a tour guide on the Gold Coast for Japanese honeymoon couples because I had the language, but then started my own tour company. That was my first shot at becoming an entrepreneur.

Robert ran this company with his brother and some friends, and their business model was to get their customers through larger travel companies. He says this job was “awesome” until Japan’s economy took a turn for the worse and the tourism industry was hugely impacted by this.

R: But, I got up, I dusted myself off, and I jumped into a different industry which was information technology, and that was definitely a good decision.

Okay, so what about Ginza Hub? How did you end up running a co-working space?

Robert explained that after the March 11 nuclear disaster in Tohoku, fish and seafood consumption fell and really affected the businesses around Ginza and nearby Tsukiji fish market. As a result of so many businesses going broke, the building that currently houses Ginza Hub (which is also owned by Robert’s family) lost a few of its tenants and times were becoming difficult. A friend suggested he set up a coworking space in the empty levels of the building and things went from there.

R: At the time there were 70 co-working spaces in Tokyo, from great big centres sponsored by the likes of Yahoo down to little mum and dad cafe fronts where they were trying to generate more business.

I thought, well, instead of just running in and possibly failing let’s test the market this time. So I did some presentations, I described how cool co-working spaces can be, it will get you out of your kitchen but you don’t have to go out and rent an office which is very difficult for foreigners here. If I could get five people out of my audience to say that they will pay for this, I’ll build it. And actually I did have quite a few people say they would sign up and a couple of them are still with me.

I launched Ginza Hub very bare bones, I let my members tell me what they wanted, like ‘we want a whiteboard, we want a projector’, whatever they wanted, I built it. So Ginza Hub became a place that my members built rather than what I thought would be cool. I honestly thought we were going to be a kind of software hacking place, and that didn’t happen at all. It’s more about professional services, photography, translation, presentation skills, makeup, all sorts of things. 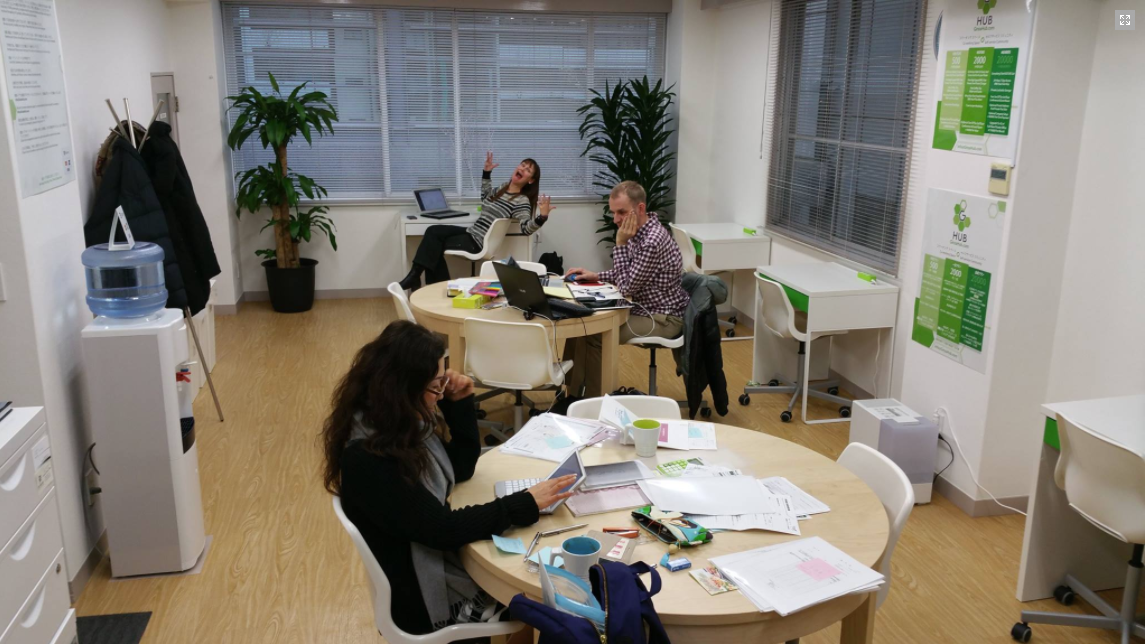 And what have you found are the difficulties of being a foreigner who is running a company in Japan?

R: The difficulties are always two. Number one: foreigner unfriendliness in real estate. Japanese people tend to be risk averse as a culture. It’s very easy for business owners to say no, sorry’. It doesn’t matter if you speak Japanese well or if you have a lot of money in your pocket, if you’re not Japanese a lot of doors are closed to you in regards to renting space.

Robert originally wanted to open an izakaya style bar and gave himself two years to accomplish it but ultimately had to give up because of the difficulty of renting space as a foreigner. He says even when he did find someone who was willing to rent to him, the space would be in a state that required a lot of upfront costs for renovations and upgrades for things like air conditioning.

R: The second thing is infrastructure. If you’re lucky enough to land a place, it will be absolutely bare bones, a skeleton of a room, which you then have to do the light fittings, furniture, all sorts of infrastructure, airconditioner mayber, and that’s a massive cost to get started.

The very first place I rented in Kawasaki was a small office, I was building an IT consultancy, and it sucked up all my savings, maxed out my credit cards, took everything I had just to get a basic set up with a few desks, some computers, and enough equipment to get us going. It was really, really tough – and this is why I think co-working space is great!

If you can get around these barriers, you can do very well.

In the Kawasaki office, Robert built his consultancy company to 32 employees, working on million dollar contracts in the banking industry right up until Robert sold the business just before the global financial crisis. He says it was a really fun time and he still hangs out with some of his old employees. After this business venture, Robert went back to Australia again to start investing in real estate – first in Australia and then in Japan.

Are you seeing more openness in Japan towards foreigners, especially ones who are working professionally in Japan?

R: Yes and no. Certainly in Tokyo and some of the larger city centres. Some foreigners are seen as sort of elite, especially in software.

In Kitakyushu they’re trying to make it easy [for foreign entrepreneurs to enter and stay in Japan] through [making] visas [more attainable]. A lot more areas are providing wi-fi, everyone’s thinking about the Olympics, more menus are in English for the tourists.

It’s a progressive society here, and other cities are wanting to get a piece of the pie that Tokyo seems to be enjoying by making it easier for foreigners to live, to get visas, to get work and to get support from the government and I think that’s a good thing.

But, it is still an ancient culture so there will always be those differences which we have to overcome, I can’t see that changing anytime soon. If you’re in Japan you have to respect the laws and the customs, there’s no way around that.

What’s something you’ve been able to accomplish thanks to your connection to Japan?

Ginza Hub is a beautiful way for me to give back to the community that helped me. I get young people coming here from all over the world, we’re all going in the same direction, it’s really my pleasure to help those guys like I was helped back in the day. Mentoring, or at least coaching them on the things to do or not do when you’re building a business in Japan is a really good feeling.

Do you have any advice for current students?

R: I could say knuckle down, work hard, keep your eyes on the ball, all those ordinary things, but I’d like to go somewhere a little different I think.

I’d like to encourage students of language or culture or anyone really to be aware of social and media conditioning. We get blasted with information each and every day and if we try to consume all of that it moves us into a certain direction, it makes us into a certain person.

Robert asks students to be aware of being influenced by companies who use content to make people feel a certain way with one sided stories that don’t always give the full picture, or are there purely to persuade someone to click or buy. The amount of content available, especially online, can be overwhelming so Robert suggests consuming less of it.

Do you have any questions for Robert? Leave them down below in the comments and we’ll chase him up for you!